Thingyan is a festival celebrated across Myanmar (Burma) as a New Year festival. Thingyan translates which translates 'transit [of the Sun from Pisces to Aries], which usually falls around April in the Burmese month of Tagu. The Buddhist festival is celebrated for four to five days. Previously, the dates of the festival were calculated according to the traditional Burmese lunisolar calender. Recently the dates of the festival are fixed according to the Gregorian calender making the festival last from the 13th to the 16th of April. One of the most important festivals in Myanmar, the festival takes place during the hottest time in the year and what a way to cool down other than splashing or dousing one another with cold water with any vessel.

The origin of the waterfestival - Thingyan

The origin of Thingyan comes from the Buddhist version of a Hindu myth. The king of Brahma named Arsi, lost a wager to the King of the Devas (Gods), Sakra. Sakra decapitated Arsi as agreed and an elephant's head was kept as replacement on Arsi's body who then became Ganesha. The Brahma was so powerful that if the head was thrown into the sea, the water in the sea would dry up. Similarly, if the head was thrown onto the land, the land would be scorched. If it were thrown into the air, the sky would burst into flames. Sakra then ordered the Brahma's head to be carried by one princess devi after another taking turns for a year each. The New Year henceforth has come to symbolize the changing of hands of the Brahma's head. 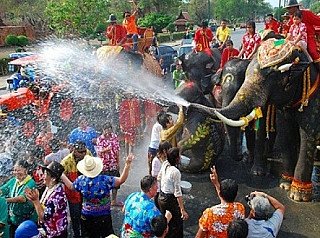 On the eve of the festival, the Burmese people enjoy by being involved in various activities like music, song, dance and other merrymaking activities in the anticipation of the water festival. Every neighborhood can be seen with well decorated bamboo or wood pavilions and stages.

Serious water throwing begins only until the first day of A-kya nei in the most parts of the country although there may be exceptions in some parts. Traditionally, the festival involved the sprinkling of scented water in a silver bowl using sprigs of Jambul. This practice is still continued in rural areas. The sprinkling of water is believed to "wash-away" one's sins of the previous year. In major cities, huge syringes of bamboo, brass or plastic, garden hoses, water pistols and other devices are used to squirt water in addition to the gentler bowls and cups. Similarly, water balloons and fire hoses are also involved in squirting water to people. As it is the hottest time of the year in Burma, a good splash of cool water is welcomed by most of the people.

The third day is called A-kyat nei (there may be two days for this particular occasion in certain years). The fourth day is known as A-tet nei when Thagya min returns to the heavens, the last day of the water festival.