The tradition of casting bronze Buddha statues in Nepal is centuries old and still continues now-a-days.

Patan is one of the major cities in Kathmandu valley located in Lalitpur Sub-metropolitan city. The place is popularly known for its rich cultural heritages, arts, crafts, traditions, feasts and festivals. Patan is filled with Buddha statues, wood carvings, temples, historical architectures build by the different era Kings and Buddha stupas. The city is also the birthplace of two famous legendary artisans Arniko and Kuber Singh Shakya who are believed to be incredible architects who uplift the artistic flavor in Nepal. It is said that the city was built in third century B.C by the Kirat Dynasty. The majority of Patan arts are comprised from the two religions Hinduism and Buddhism. Therefore it requires the knowledge of both the religions to understand peculiarity in Nepali arts. It is believed that when the Indian Emperor Asoka visited Kathmandu with his daughter Charumati in 250 BC, he had erected five Asoka Stupas in Patan. Four stupas in each corner representing the Dhamma wheels and one in the middle of Patan. Though the history of Nepalese art has begun from the ancient time but the Newars i.e. the original inhabitants of Patan had adopted the remarkable insight of Nepalese arts. The tradition of sculpting statues begins from the period of Licchavi King (200-800 A.D.). There are still various forms of artifacts found in different parts of Nepal from that period. Apart from all these facts about Patan, the Patan Durbar Square is one of UNESCO world heritage listed sites among the 7 monuments zones that make up the Kathmandu valley. 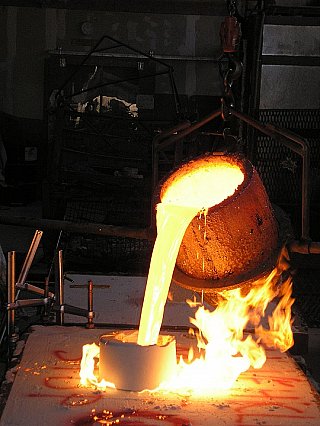 Bronze casting in Patan is the finest forms of art alike stone sculptures, terra cotta arts, painting, temple construction and architecture. In earlier time Licchavi Kings had already started making the decorated bronze coins, bronze gargoyles with crocodile heads as an attractive part of decoration in royal palaces. This process of producing variety of arts from Bronze give a direction to a new invention of crafting and sculpting other different forms of temples, Buddha statues and manuscripts. The Pala School in India also influenced Nepalese arts during the Pale dynasty between 8th to 12th centuries which gives a new dimension in artistic achievement in 15th century. For the most time, Newars of Patan started making Buddhist Pantheons. The Buddhist idols were also often crafted in bronze like the image of Samvara, Hevajna and the various Shaktis. All these artifacts were made for the rituals purpose and trade to Tibetan market. In that time Buddha statues had a high demand in Tibet because Tibetans were completely influenced by Buddhism whereas the majority of Nepalese followed Hinduism. The bronze casts are either hollow or solid where figures are still produced by means of cire-perduce or last wax system. Hollow cast are done for reducing the weight of the statues as well as cost of using excessive bronze metals. To make cast a layer of clay is first produced and is covered with another layer of wax. This fine layer helps in closing the pores in bronze. The wax coat covers the air bubbles produced from the clay coating. Similarly, gold was also used by the artisans during Licchavi Kings period for coating the precious statues.

The Bronze castings in Patan, Nepal are magnificent having the unique appearance and expressions. However, Nepal and India being the neighboring countries trades every kind of stuffs from goods to traditions and cultures. So, unanimously there resides similarity in stances, decoration, coiffures and ornaments between two countries. Highly professional craftsman of Nepal has demonstrated their class in making diverse forms of artifacts from the ancient times which has established the nation wealthy in arts, culture and traditions.