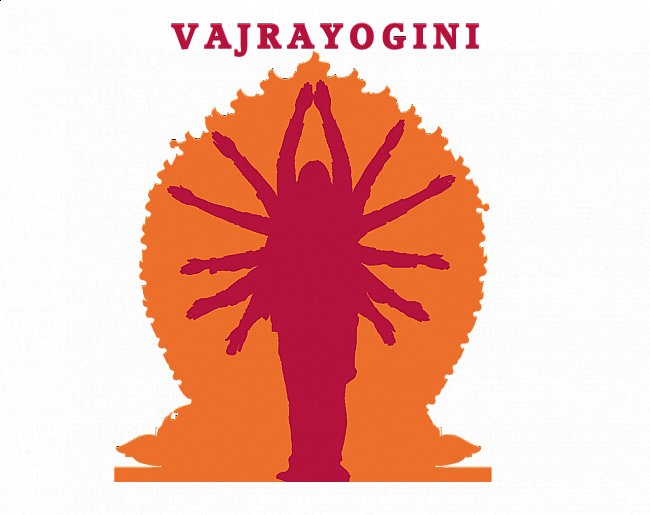 Vajrayogini is a Hindu goddess of knowledge and wisdom and is also known as Ugra Tara for Buddhist world.

Vajrayogini is a Hindu goddess of knowledge and wisdom and is also known as Ugra Tara for Buddhist world. Therefore the goddess is equally sacred to both the Hindus and Buddhists. The name Vajrayogini suggests a close association with Tantric beliefs of Vajrayana Buddhism. Bajra or Vajra is the Buddhist symbol of thunder and lightning. Therefore the wielder of Vajra is named as Vajrayogini. The tantric beliefs which were developed as a synthesis of ancient pre-Hindu religions and new ideas rejected many orthodox Hindu as well as Buddhist beliefs. Therefore the tantric believers brought out a Jogini as the female counterpart to a Bhairab, the angered or wrathful form of Lord Shiva. Therefore, Vajrayogini can be termed as the wrathful form of Shiva's partner Mahadevi or Parwatiholding a Vajra but in a more peaceful manifestation. A parallel development in Buddhism is that the goddess Vajrayogini is the female counterpart to the Dhyani Buddhas.

The goddess Vajrayogini is believed to be one of the wisest and strongest of the deities who is able to grant the gift of superior enlightenment to anyone she thinks that deserves. The Buddhism in Nepal is very much influenced by the society in Nepal itself. As there are many instances of development of shaktis of the female consorts were and are still widely popular in the Kathmandu valley, these shaktis sometimes completely overshadow their male counterparts, especially in Tantric belief.

A temple dedicated to the goddess Vajrayogini is located at Sankhu in Kathmandu, Nepal. It is also well known as Bodhisattva's Temple. The temple is actually a sort of temple complex, with the main temple having been built by King Pratap Malla in the sixteenth century.The Vajrayogini temple is situated about 20 kilometers northeast of the capital Kathmandu. The area surrounding the temple is often referred to as Gunbaha, meaning as 'recreational forest place' in Newari. The main temple is a three storied pagoda building and was constructed carefully with the utmost attention to details. The statue of the goddess Vajrayogini is located inside the temple. The statue features a red face (hence the name Hyangu Khwaa Maaju; meaning Red faced mother in the Newari Language with three eyes. The hands of the goddess have her thumb and middle finger carefully decorated.

The hill top, on which the temple is located, is accessed by a very long carved stone stairway. The entire site is covered richly with Newari architectural metal work, carved wood details, and ancient artifacts like stone taps and Buddha statues. Including a small Buddhist stupa claimed to pre-date the Shakyamuni Buddha.

The earthquake which hit Nepal (epicenter being Barpak and Sindhupalchowk) on April 25th, 2015 is one of the most devastating earthquake in the history of Nepal. Thousands of people lost their lives and major architechtures and cultural heritage sites were destroyed by the Earthquake. Destruction of this temple was not an exception.

This temple is believed to be built around 300 years. The strong earthquake destroyed the temple and was forced to stand with support of metals and wooden poles. It was declared as an unsafe place and restoration and rebuilding should be considered as soon as possible. Sankhu Reconstruction Committee and Locals / Volunteers have been looking after restoration, preservation, and rebuilding activities of the affected areas. All of the associated members have been given various responsibilities such as collecting artifacts, timber, sanjhyas (decorated wooden windows), and personal belongings. The earthquake gifted unnecessary and unavoidable destruction; temples, ponds, pagodas, and buildings were demolished.

There is a very interesting story about the origins of the godess Vajrayogini in a holy book, which was discovered a long time ago. According to the book, the rest of the world was covered in snow and before long there emerged a five colored flame, which came to be the volcaninc goddess. The site of the the goddess' emergence was then used as the site for a temple to be built in her command. The priesets made use of the nine surrounding caves for centuriestoserve this temple eversince. The first priest to serve the temple, Gyanacharya Yogi, who did penance in the cave was given superior enlightenment.

The goddess then ordered another priest Jog DevBajracharya to establish a town of Shankharapur (conch-shell shaped town) near the premise of the temple to run a fair. The town is now called Sankhu.