Boudha stupa is semicircle shaped and contains the relics and remaining of Buddha. The huge mandala makes it one of the largest spherical stupas in the world. Stupa in Sanskrit is referred to a dome shaped architecture which is called Chorten in Tibetan and now adopted in English too. The stupa is a historical pilgrimage site for all the Buddhists around the world. It was built right after the demise of Lord Buddha during the 5th century AD in the reign of King Manadev (464-505)AD and is the world largest Chhyorten. The stupa was built using many kilograms of gold for decoration. It is believed that the stupa contain the remains of Kassapa Buddha. The giant Boudhanath stupa is a gateway to heaven serving as a horizon between the earth and sky. The base of the stupa structure consists three large platforms decreasing in size. These platforms are symbolizing the sky whereas the circular vase supporting the semi-sphere signifies water. The eyes of Buddha painted on stupa are diversely described as inscrutable, impassive, empathy and shrewd.

Facts about the Stupa 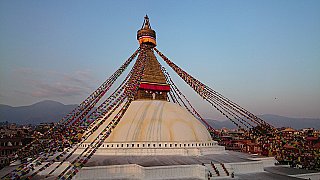 Boudhanath also called as Boudha in local accent is situated in Kathmandu, Nepal which is about 11 km northeast from the center of city. The place is in the heart of Kathmandu located in Boudha named after the stupa. The nearby place called Sankhu was the shortest route for trading between Kathmandu and Tibet in ancient times. Due to this reason you can observe the mixed combination of Nepali locals and Tibetan people in that area. Further, the pictures of Dalai Lama , Tibetan ayurvedic medicinal stores, Buddha statue shops , traditional arts shops can also be seen around the stupa. The variety flavors of cuisines found in nearby restaurants are absolutely delicious making you voracious. The restaurants serve variety of foods brought from Himalayan Yak cheese to branded liquors. Boudha stupa was listed in world heritage list by UNESCO in 1979 which has provided a more significant value in its presence. Along with Swayambhunath, Boudhanath is also the most popular tourist sites in Kathmandu. Apart from observing the history and relevance of Boudha you can also see the snowcapped mountains in the surrounding if the sky is clear.

Boudha is a very engrossing and spiritual area where devotees walk more than three times a day enchanting holy mantra ‘ Om Mani Padme Hum ’. During the full moon day, monks are indulged in prayers, singing songs and number of Buddhists comes over the place for visiting. The five most promising elements representing Buddha (earth, air, water, fire and space) are comprised in the Stupas architecture. It is believed that thousands of Buddhas incarnated as Lamas in Boudha stupa and the rays of Bodhisattva entered stupa in the form of song from heaven and was heard in the sky. Due to this reason, Boudha is viewed with great reverence as are Sange, Thange, Duibe, Chorten etc. The main entrance to this holy place is in the north side of the upper platform. Surroundings of Boudha Stupa are streets and narrow alleys where the walls are painted with Buddha images , scripts with vibrant lines. You can get to Boudha either by hiring a taxi which is affordable or you can use public vehicles from almost any bus park in the Kathmandu valley.