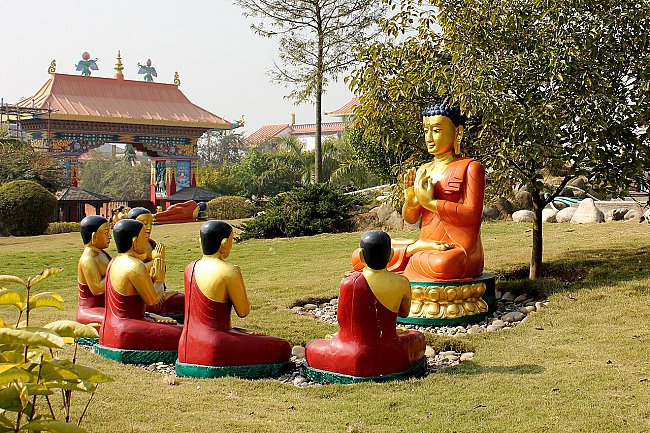 There are 10 Great Disciples of Lord Buddha who had carried his teachings, dharma, and had spread Buddhism far wider. They are Sariputra, Moggallana, Mahakasyapa, Subhuti, Purna, Katyayana, Anuradha, Upali, Rahula and Ananda.

The life of Buddha has always been for the purpose of helping all sentient beings to make them free from suffering and pain of the life. During the lifetime of Buddha , he countered numerous people and his encounter with those people has transformed many people and followed him since then. During his forty-five years of life time, many became his disciples but there are Ten Principal Disciples of Lord Buddha who carried on his teachings, his dharma and spread Buddhism far wider. Each disciple were known for a specific quality or area and being a foremost among all the Buddha’s disciples. The Ten Principal Disciples of Lord Buddha are:

Sariputra, also known as Upatissa was one of the two chief male disciples of Lord Buddha. Another chief disciple of Lord Buddha was Moggallana. According to the Buddhist legends, Sariputra and Moggallana were borned on the same day. He attained Nirvana and became Arhat and became known as “Foremost in Wisdom”. He was also renowned for his teaching. Even Bodhisattva Avalokitesvara preaches to Sariputra in Heart Sutra. He was praised by Lord Buddha as an enthusiastic and effective Dharma Teacher: “You are wise, Sariputta, great and wide is your wisdom, joyful and quick is your wisdom, sharp and analytical is your wisdom”. Sariputra attained Enlightenment after two weeks of his ordination.

Mogallana was another chief male disciple of Lord Buddha and was also known as Maudgalyayana. He was the top masters and possesses transcendental powers. Moggallana and Sariputra were close friends and went to seek the preaching and teachings of Lord Buddha after they became unsatisfied with Sanjaya Belatthaputta. Moggallana is depicted as the monk with a dark complexion. Moggallana, since he possessed psychic powers, usually used this power to help peoples. Moggallana died beforeLord Buddha, two weeks after the death of Sariputra. 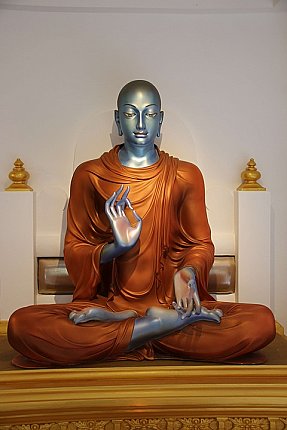 Mahakasyapa was known for his ascetic practices. After Lord Buddha attained final nirvana, he along other 500 disciples assembled Buddha’s Suttas and became the leadership of Sangha. And he became the first man who directly preached about the teachings and sutras of Buddha. Mahakasyapa is also called “father of sangha”.

Subhuti was one of the ten Great Disciples of Gautama Buddha. Subhuti was known as foremost in understanding the doctrine of emptiness. He is mentioned in an important teaching of Prajnaparamita of Mahayana Buddhism.

Purna Maitrayani-Putra is also called “Purna” and was well known as foremost in preaching the law. Purna was very enthusiastic disciple of Gautama Buddha and was very good in his preaching. Purna had always thought about the future of Buddhism and took necessary steps for spreading the Buddha seeds. There was no evidence of Purna attaining Nirvana. He had only preached around for the future of Buddhism and serving the public.

Katyayana, also known as Mahakatyayana was one of the 10 principal Disciples of Gautama Buddha. He was known as foremost in spreading the Dharma, taught by Buddha. He understood the lecture of Lord Buddha the best.

Anuradha was a cousin of Shakyamuni Buddha. He and Ananda became the disciple of Lord Buddha at the same time. He was foremost in divine insight. He was the master of clairvoyance. He lost his sight because he swore not to sleep after getting criticized by Lord Buddha. And later he got another pair of eyes that is believed to have the power to see the truth.

Upali was working as a barber before he joined Buddha. He was foremost in observing the precepts. He became the disciple of Buddha when he was cutting Buddha’s hair. Actually, Upali was born in the lowest class of Indian Society, so he was hesitant when he asked if he could join Lord Buddha being the lower class man such as himself. Later Upali became Arhat and became the chief disciple and later developed Vinaya School.

According to history, Rahula was the only son of Shakyamuni Buddha before he became Buddha. He is one of the 10 Great Disciples of Lord Buddha. He became a monk when he was still a child and achieved Enlightenment at the age of 18. He was the first novice monk in the hometown of Lord Buddha.