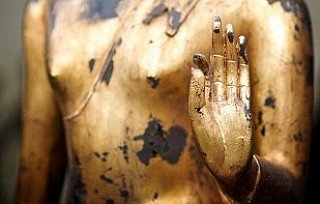 The Buddha statues and the iconographic representations of other Buddhas and Bodhisattvas are often depicted with their hands performing a number of different poses and ritual postures. These hand gestures and postures are commonly known as the Mudras. Among various mudras we can see in these sculptures, Vitarka mudra is one of the much commonly found mudra or poses. Vitarka Mudra is the mudra or a gesture representing the discussion and transmission of the teachings by the Buddha. It is also taken as the hand gesture which induces the energy of the teachings and discussions of the spiritual principles which may also involve the arguments of the ideas. These discussions may also feel like the transmission of a particular teaching without the use of words.

See our Buddhas in Vitarka mudra

The Vitarka Mudra is usually performed by joining the tips of the thumb and the index fingers together while keeping the other fingers straight, which is pretty much similar to Abhaya as well as Varada mudra but with the thumbs touching the index fingers. The circle formed by the thumb and the index finger symbolizes the constant flow of energy and information. The hand with the tips of the thumb and index finger joined together is held closer to the chest than in that of the Abhaya Mudra while the palm is facing outward. The other three fingers of the hand are pointed upwards. The earlier versions of the mudra were found to have involved the right hand of the images but these days the gesture is often depicted with both the hands. There are many variants of Vitarka mudra that have been observed. In one of the variants of this mudra, the palm of the left hand is rested upward in lap with the right hand raised to the shoulder lever with the thumb and index finger forming a circle. Similarly, in another variant, the index and the little fingers on the both hands can be seen extended with the middle and ring fingers curved slightly inwards. The left hand in this variant can be seen pointing up while the right hand is pointing down. Sometimes the middle finger and the thumb are seen touching each other which is taken as the mudra of great compassion. Similarly, the touching of the thumb and ring finger expresses the gesture of good fortune.

Vitarka mudra is a common gesture among the Buddha statues from Dvāravatī ages in Thailand. This mudra is also sometimes, substituted for Dharmachakra Mudra. Also called "The Gesture of Debate" or "discussion" mudra, Vitarka mudra can be seen in both the sitting and standing Buddha statues. The Vitarka mudra can be seen in many other variants in the regions where the Mahayana Buddhism is prominent, specifically the countries in East Asia. In Tibet, the Vitarka Mudra is often taken as the mystic gesture of Taras and Bodhisattvas with some variations by the deities in Yab-Yum. Vitarka mudra is also known as Prajnalinganabhinaya or Vyakhyana mudra (the mudra of explanation) in Tibet.