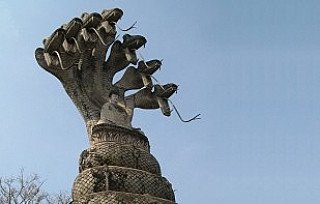 Look at our Naga Buddha statues

Naga, in Hinduism and Buddhism, is the Sanskrit word for a deity taking the form of a great snake, specifically the multi-headed king cobra. The traditions about nagas are common in all the Buddhist countries in Asia. In many countries, the concept of naga has merged with local traditions of many great and wise serpents. The Buddhist naga has the form of a great cobra, usually depicted with a single head but sometimes with many heads. The naga which is seen sheltering the Buddha while meditating is known as Mucilanda. Mucilanda is believed to have protected the Buddha from the elements like rain and storm after he attained enlightenment. It is said that the four weeks after the Buddha began meditating under the Bodhi tree, the heavens darkened for seven days, a heavy rainfall started. The mighty king of the serpents, Mucilanda then is believed to have emerged from beneath the earth and protected the Buddha with his hood as the Buddha is considered the source of all protection. When the storm stopped, the serpent king Mucilanda assumed his human form, bowed before the Buddha and returned to his palace in joy. The iconographic representation of this Buddhist folklore is known as the Naga Buddha statues. These artistic representations of the Buddha meditating under the protection of Mucalinda are common in many Buddhist countries which are famous for their unique Buddhist arts, namely Burma, Laos, and Thailand.