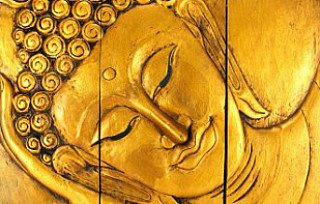 Thailand has been under the peaceful shelter of Buddhism for over 2500 years. The teachings of the Buddha, also known as Dhamma is applied almost every aspect of life within the kingdom. The color representing the Dhamma has been uniting the people of Thailand into a society full of harmony and peace. One of the most important aspects in the lives of Thai people is the unique Buddhist art they have to represent their devotion towards the teachings of the Buddha.

Look at our thai buddhism arts

Buddhist art in Thailand was first influenced by the direct contact with Indian traders as well as the expansion of Mon kingdom in Burma from 1st to 7th centuries. This led to creation of various Hindu and Buddhist art which was inspired from the Gupta tradition in India.

The beginning of 9th century introduced the establishments of many schools of Thai which were strongly influenced by Cambodian style of Khmer art in the north and Sri Vijaya art in the southern part of the kingdom. The peculiar characteristic of the Buddha statues in the Khmer style were the square carved face of the Buddha and a cleft chin. The straight edged mantle was typically extended all the way to the navel. The images were normally carved with seated legs fully folded, resting on a roughly carved lotus base. Similarly, Sri Vijaya art were integrated Indian style, Javanese and Khmer art with different local styles resulting in works with a very distinctive appearance. Both of these styles strongly followed Mahayana faith of Buddhism. The Buddhist art of this particular period is distinguished by the clear fluidness in the expression of the Buddha statues. The subject of these Buddhist arts characterizes the Mahayana tradition which describes the tradition of the creation of multiple Bodhisattvas.

In the 13th century, Theravada Buddhism was introduced in Thailand as a direct influence from Sri Lanka. During the same time, a small ethnic Thai kingdom of Sukhothai was established. The new faith introduced highly stylized images and statues in Buddhism of Thailand. This new style varied with other styles with slightly geometrical and almost abstract figures added in the artifacts.

Similarly, with the beginning of 14th century the Buddha was represented in more stylistic manner with sumptuous garments coupled with jeweled ornaments. This continued till the 18th century when the Thai sculptures and temples were gilded and enrich with many beautiful inlays.