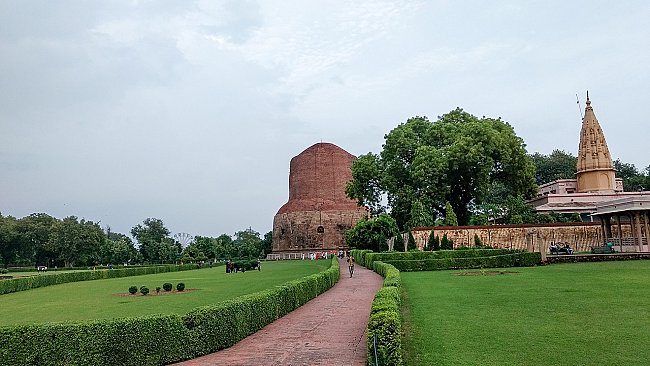 Sarnath is a religious city which is located in the north east of Varanasi in Uttar Pradesh, India and is respected and worshipped by every Buddhist followers of Lord Buddha. Sarnath is one of the four most important pilgrimages in the world which is believed to be authorized by Gautama Buddha himself. Other three most important pilgrimages are Lumbini (Birth of Gautama Buddha), Bodh Gaya (the place where Lord Buddha attained enlightenment ) and Kushinagar (the place where Buddha attained parinirvana).

The Deer Park which is located in the Sarnath is famous as it is the place where Gautama Buddha first taught Dharma. It is also stated that Sarnath is the site of Lord Buddha’s Dhammacakkappavattana Sutta.

After 6 years of hard work and practices, Lord Buddha finally attained “Enlightenment” in Bodh Gaya making it one of the most important pilgrimage in the world. After 5 weeks of attainment of Nirvana, Lord Buddha came to Sarnath and started teaching the Pañcavaggiya monks who left him in Bodh Gaya before Lord Buddha attained “Enlightenment”. These five monks learned and understood about the Dharma in a short duration. It was the place where he first preached the Dharma to the Pañcavaggiya monks in the Deer park and started “Wheel of Dharma”.

In Deer Park, Lord Buddha first taught sermon in order to share his knowledge so that he could free all human beings out of their misery, pain, sufferings. The first suttas that Lord Buddha taught was Dhammacakkappavattana Sutta. But there are other different Suttas that were preached by Lord Buddha in Deer Park. They were Anattalakkhana Sutta, Saccavibhanga Sutta, Pañca Sutta, Rathakāra or Pacetana, two Pāsa Suttas, and so on. He also preached about the middle way, the Four Noble Truths and also prescribed the Eight-fold Path. The Four Noble Truths are as follows:

Lord Buddha prescribed Eight-Fold Path in order to the remove or to end the sufferings. 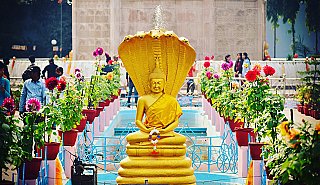 Sarnath is most popular for the Deer Park, where Lord Buddha preached his first sermon. Some of the other important places of Sarnath are as follows:

The Dhamekha Stupa is the most conspicuous structure built in Sarnath. It is believed the Pañcavaggiya monks after leaving Lord Buddha used to live in this spot in Sarnath. The original stupa was believed to be constructed by Emperor Ashoka in order to spread out the teachings of Lord Buddha all over the India. This stupa is considered to be the sacred place where the voice of Buddhism was first heard.

This stupa is the place Buddha met his first disciples. This stupa is going under reconstruction in the present day.

The erected Ashoka Pillar also known as “Lion Capital of Asoka”. This pillar was broken during the Turk invasions.