Lokeshwor: The Lord of all Realms

One of the most important Buddhist myths tells of Lokesvara vowing never to rest until he has helped and freed all the sentient beings in the world from samsara.

Among many Buddhist deities in Buddhism, Lokeshwor is one of the first ones to be worshipped and paid respect to. In Sanskrit, Lokeshwor means the Lord who looks down towards the entire realm. Similarly, Lokeshwor is also referred to as Padmapani ("The Holder of Lotus") in Sanskrit. He is a Bodhisattva who represents the compassion of all the Buddhas. Lokeshwor is variably depicted, described and portrayed differently in different cultures and countries as either a male or a female Buddhist deity. According to Chinese Buddhism, Lokeshwora or Avalokitesvara has been depicted in a different female figure of Guanyin. In Cambodia however, he appears as Lokesvara. 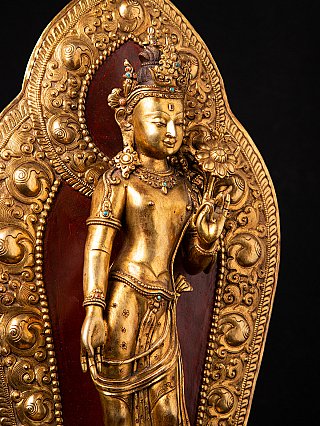 One of the widely revered Bodhisattvas in mainstream Mahayana Buddhism, Lokesvara is also revered unofficially in Theravada Buddhism. Though there has not been any consensus regarding the origins of Lokesvara, the origin of Lokesvara is depicted both in Mahayana Buddhism as well as Thereavada Buddhism. According to Mahayana teachings, Lokeshwor is the boddhisatva who made a great vow to help all the sentient beings during the times of difficulty and hardship. Also, he has also vowed to postpone his own Buddhahood or Enlightenment until he has helped every sentient being to achieve Nirvana. There are various sutras associated with Lokeshwor in Mahayana stream of Buddhism. They are:

In the Theravada accounts, Lokeswora is a Bodhisattva whose veneration has been going on till the present day in Sri Lanka. He is known as Natha in the emerald island. Recently, he has been some attempts of identifying Natha with Maitreya Bodhisattva. However, the traditions of iconography or Buddha statues of Natha are identified as an image of Amitabha Buddha on the front of the crown. Similarly he is popularly worshipped in Burma as Lokanath, Thailand as Lokesvara and Cambodia as well as Nepal as Lokeshwor.

One of the most important Buddhist myths tells of Lokesvara vowing never to rest until he has helped and freed all the sentient beings in the world from samsara. Despited all of his efforts, he realized that many unhappy beings were yet to saved. With the failure to help the needs of so many people, his heald split into eleven pieces. Amitabha Buddha, after seeing his difficult situation, gives Lokeswor eleven heads in order to hear all the cries of the suffering and pain from the sentient beings of the world. After gearubg all the cries of pain, Lokeshwora attempts to reach out to help all those who needed help but eventually failed as his two arms shattered into pieces. Again, Amitabha comes to his aid and provides him with a thousand arms with which to help the biengs to get rid of their suffering.

Likewise, the other statues and images of Lokeswor depict him seated with four arms. These statues are usually scultped in the Hindu form: seated in Rishi yoga or hermit meditating pose, gentle smiling face with the third eye on the forehead like Lord Shiva. The torsos of the images are energetic and are depicted as royal hierarchy.

Similarly, Lokeshwor has also been depicted in various forms of other Buddhist arts like Thangkas and Paubhas from various countries like Nepal, Tibet, etc