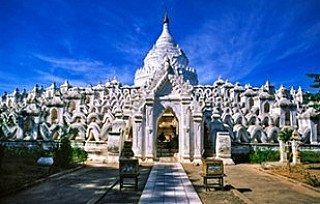 Asia is the place of origin for Buddhist art. From the establishment of Buddhism, Asia has been the hub for most of the Buddhist art across the world. Following the historical life of Siddhartha Gautam Buddha in the Indian subcontinent, Buddhist art has spread across the continent rapidly. Though the art related to Buddhism originated at one particular place, the style of the artifacts do vary from the culture of any locality. This is because; Buddhism embraces the local culture rather than make the people from a locality embracing the culture of the place where Buddhism originated. Therefore, it can be implied that the Buddhist art in Asia evolved by coming in contact with other cultures as it spread across the continent and the world.

Early Buddhist art did not show the Buddha in his human form, as the artists were reluctant in depicting the Buddha anthromorphically. In relief sculptures at early stupa sites, his presence is indicated by symbols such as the lotus (signifying purity), the eight-spoked wheel (emblem of the Buddha’s law), the parasol (ancient symbol of royalty), and a footprint (the Buddha’s presence). It may be that this symbolic way of representing the Buddha arose from the view that with enlightenment he had transcended human form. Not until the first century A.D., more than five hundred years after his death, do images of the Buddha in human form begin to appear. Perhaps these figures were a response to emerging beliefs that the Buddha was not only a great spiritual teacher but also a savior god who, with personal devotion, could help others achieve nirvana. The earliest works of Buddhist art in India date back to the 1st century B.C. The Mahabodhi Temple at Bodh Gaya became a model for similar structures in Burma and Indonesia. The frescoes at Sigiriya are said to be even older than the Ajanta Caves paintings.

Look at our Buddha statues

The human depictions of the Buddha started to emerge from the 1st century AD in Northern India. The two main centers of creation have been identified as Gandhara in today’s North West Frontier Province, in Pakistan, and the region of Mathura, in central northern India. The interesting thing is the Buddha is an extensively used subject in arts such as statues, paintings and literature but not in the arts like music, dance and performance based arts. As Buddhism expanded outside of India from the 1st century AD, its original artistic features blended and coexisted with other artistic influences and features, leading to a progressive differentiation among the countries adopting the faith. For example Thailand adopted Buddhism to create its own Thai Buddhist art as well as Burma adopted Buddhism to fabricate new breed of Buddhist art known as Burmese Buddhist art.