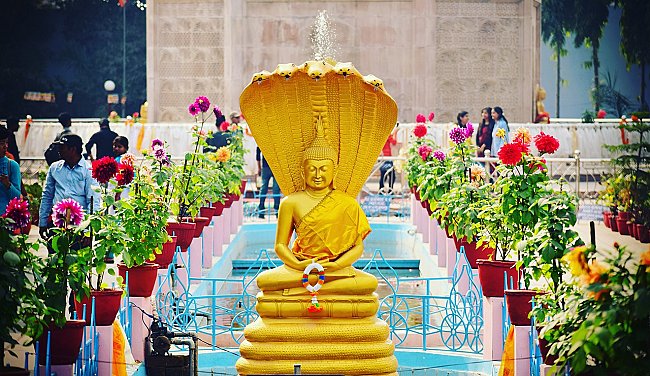 Kushinagar, also known as Kushinara in Urdu is a town in Kushinagar District of Indian State of Uttar Pradesh. In Kushinagar district, Kushinagar is also a Nagar Panchayat. This is the place that Lord Buddha chose to die, making it one of the important Buddhist pilgrimage.

“ Now the Blessed One advised the bhikkhus – Well now, bhikkhus, my counsel is: experience is disappointing, through vigilance you succeed. These are the last words for the Tathagata”- Lord Buddha

This is the last teachings shared by Lord Buddha among large group of disciples.

It is believed that among various reasons, there were three reasons for Lord Buddha to choose this place for his Parinirvana. They are:

Kushinagar has long and ancient history long before the era of Lord Buddha. During ancient times, Kushinagar is also known as Kushavati and Jatakas. Kushinagar also has Hindu influence during ancient times. In the famous Hindu scriptures, Ramayan, Kushinar is mentioned as the city of Kusha (the son of Ram, the king of Ayodhya).

As we know Kushinagar is the place where Lord Buddha decide to provide his last preaching and of course his death . It is said that the cause of Lord Buddha death was falling ill from eating a meal of unknown mushroom species.

Since being one of the four most important pilgrimages authorized by Lord Buddha himself, Kushinagar is the one of the most sacred place for Buddhist supporter and followers. It has quite influenced in the tourism sector since this place is such an important figure in Buddhism.