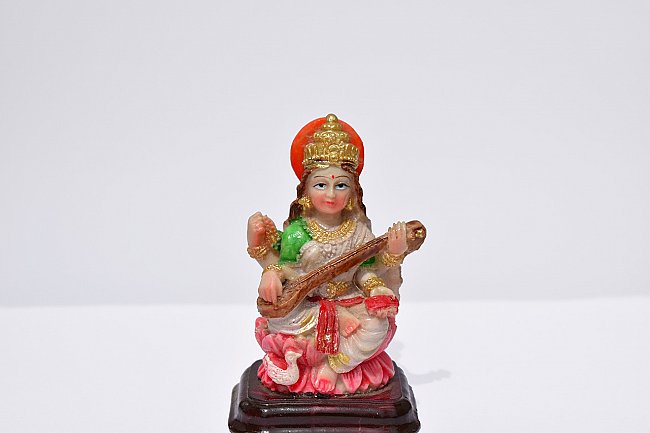 Saraswati is the Hindu goddess of knowledge, arts, music and speech. She embodies knowledge and human consciousness

Saraswati - The Hindu Goddess of Knowledge

The religion of Hinduism is filled with thousands of gods, goddesses and deities. In Hinduism, every aspect of life is represented by a god or a goddess. Among those thousands of deities, Saraswati is the goddess of knowledge, arts and music. Also called as the Mother of the Vedas, she is also referred to as Vak Devi, the goddess of speech. The goddess or Devi of wisdom embodies the flow of wisdom and consciousness. The chants to her are called the "Saraswati Vandana" which often begin and end the Vedic lessons. The Hindus believe that Saraswati endows human beings with the power of speech, wisdom and learning.

Saraswati is also considered as a part of the trinity of Saraswati, Laxmi and Parvati. Having remained as a significant goddess in the Hindu traditions from the Vedic period through the modern times, she is also revered outside the Hindu world of India and Nepal, in countries such as Japan, Vietnam, Indonesia and Burma (Myanmar). The followers of Hinduism celebrate the festival of Basanta Panchami (the fifth day of spring) in her honor and mark the day by helping young children learn how to write alphabets on that particular day.

Brahma, the god of creation, is believed to have created a goddess out of him in order to commence the existence of the world and the humans that reside in it. Her ability to spread the wisdom among the human race is considered as one of the major ways to get rid of chaos that would come should there was no wisdom in the world. The goddess is believed to have emerged from Brahma's mouth riding a swan with sacred books in one hand and a veena in the other hand and dressed in white.

The goddess Saraswati is usually depicted in various forms of arts like images and iconographies. Often depicted as a beautiful woman dressed in pure white, she is mostly represented in a seated position on a white lotus, which represents light, knowledge and truth. Generally, statues representing Saraswati are in white themes from the dress to flowers to swan - the color symbolizes purity, discrimination for true knowledge, insight and wisdom. She is also depicted having four hands representing four aspects of human personality in learning: mind, intellect, alertness and ego.

Saraswati images are seen to carry sacred scriptures in one hand and a lotus while the other two hands are used to play the music of love and life on a string musical instrument known as veena. Similarly, a white swan is often located next to her feet. In Hindu traditions, the swan represents discrimination between the good and the bad. The association with the swan is also the reason for her to be referred to as Hansvahini ("She who rides swan as her vehicle")

Buddhist cultures of Nepal, Tibet, Indonesia, Thailand, etc. have closely interrelated Buddhism with Hinduism. The Newar Buddhists of Kathmandu Valley in Nepal also take Saraswati as the consort of Boddhisattva Manjushree, sometimes even interchanging each other’s identity during various prayers and worshipping rituals. Thus, it is not unusual around Kathmandu to see a Buddha statue or a shrine to be in close proximity with a statue of Saraswati.