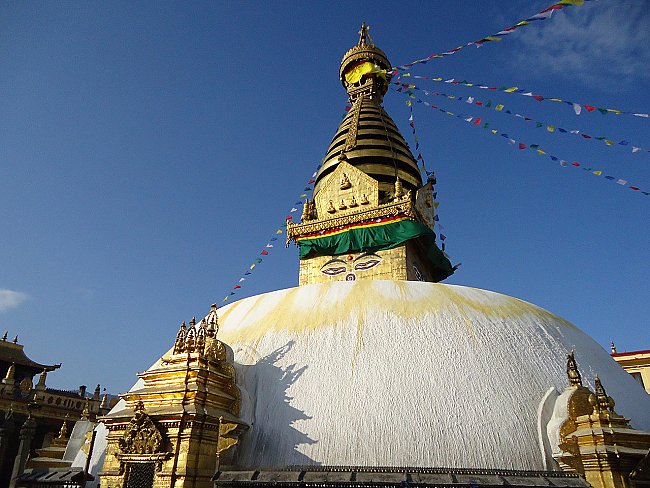 The Great Stupa at Sanchi is the oldest Buddhist stone structure in India.

Sanchi is one of few cities in India which have still protected the great number of monasteries, stupa, and also a stone book which illustrates the teachings of Buddha. Sanchi is situated at the Raisen District in the state of Madhya Pradesh, India, approximately 9 km from the ancient town of Vidisha. Sanchi is quite popular of its numerous ruins of Stupas, temples and monasteries. But “The Great Stupa” is the main attraction of Sanchi and is believed to be the oldest stone structure in India. This Stupa was originally authorized by Emperor Ashoka the Great in the 3rd century BCE.

Sanchi is the oldest Buddhist sanctuary still existed in India. Though Lord Buddha never visited Sanchi in his lifetime, but the importance of Sanchi still equals to some of the important Buddhist pilgrimage sites. Sanchi is believed to cover the entire range of Indian Buddhism, from the 3rd Century BCE to 12th Century BCE, providing a platform for an educative study of ancient Buddhist art and literature.

The principal monument of Sanchi, “The Great Stupa” or Stupa 1 was constructed under the commission of Mauryan Emperor Ashoka the Great in around 3rd Century BCE. Around the same time, Ashoka Pillar was also erected which was made up of finely polished sandstone.

It is presumed that The Great Stupa was vandalized during this period under the rule of Shunga Emperor Pushyamitra Shunga. And it is also said that the son of Pushyamitra, Agnimitra Shungaordered to rebuilt the stupa. The stupa was reconstructed twice the original size. The stupa was believed to be the symbol of Dharma (The Wheel of Law) . During the later rule of Shunga Dynasty, the second and third Stupas were built.

During the rule of Satavahana Dynasty, the gateways, and the balustrade were built and highly decorated. The gateways commissioned under Satavahana rule were covered with narrative structures. The figure of Lord Buddha was carved in these structures as canopy under the Bodhi Tree at the point of Enlightenment. Various events of life of Lord Buddha were carved.

Various other temples and additional stupas were built in the Gupta Period. Around the time of 12th Century, Temple 17 was built and believed to be one of the earliest Buddhist temples. Temple 45 was the last Buddhist temple ever built in mid-9th Century.

Sanchi is quite popular for its numerous Stupas and monasteries that were built during the time of ancient Buddhism and they still exist in the hills of Sanchi. Around 3 stupas, several temples and around 50 monuments remain in Sanchi, therefore, monuments in Sanchi have been listed in UNESCO World Heritage Sites list in 1989. Some of these monuments of Sanchi are described below.

The Great Stupa at Sanchi is one of the features of Sanchi since it is believed to be the oldest Buddhist stone structure in India which was built by Mauryan Emperor Ashoka the Great in 3rd Century BCE. The present Stupa is twice the size of the original size of the stupa built in 3rd Century. The stupa in present is 16m in height and 36m in diameter for the pedestal. The nucleus of Stupa is simple hemispherical brick structure said to be built on the relics of Lord Buddha. It was said that the construction work of this Stupa was overseen by Ashoka’s wife, Queen Devi.

Stupa 2 is situated on the hillside about 320m west of the Great Stupa whereas Stupa 3 lies 60m north of the Great Stupa. Both Stupa was constructed around 1st – 2nd Century BCE. The most beautiful and intriguing aspects of Stupa 2 is the collection of reliefs and medallions carved on Vedic posts. Only the south gateway (toranas) out of 4 toranas is present today.

Sanchi is also popular for not only stupas but also temples and monasteries also. Temple 17 is a typical stone temple built in the period of Gupta dynasty. Temple 18 much larger than temple 17 is also built in Sanchi and most parts of Temple 18 are lost.

Around 51 monasteries are built on the hill of Sanchi, and one of the monasteries, Vihara is located 7m west of the Great Stupa.