Ashoka - The Great Emperor, who won many battles with his brave soldiers, was a preacher of Buddhism

Ashoka, also known as “Ashoka The Great ”, is one of the greatest emperor born in the land of India. Ashoka was Mauryan emperor of Mauryan Dynasty and is believed to conquer almost all of the Indian Subcontinent making Mauryan Empire one of the largest and greatest empires in the world by then. He was also known for his sadistic rules for the criminal. Later, after the most brutal war in the history of the world, he followed the path of Lord Buddha and embraced the propagation of Dharma. And he started to spread Buddhism far and wide and all over the Asia.

Emperor Ashoka was also known for building the Ashoka’s Hell according to Buddhist legends. He specially built this elaborated torture chamber. According to the legend, Ashoka’s Hell is disguised as beautiful and extravagant place with full of amenities and entertainment. This chamber is built in Pataliputra in 304 BCE which started in 232 BCE and it was said Pataliputra was the capital city of the Maurya Empire. For the eight years, Ashoka expanded his empire to make the one of the largest kingdom in the history of the world.

Emperor Ashoka is also known for one of the major and bloodiest battles in the history of the world. The Kalinga war was fought between Mauryan Empire and the ruler of the state of Kalinga. It is said that Kalinga was no match for the brutality of Ashoka the Great. Around 150,000 Kalinga warrior and citizen lost their life while Maurya Empire lost 100,000 warriors and according to legend, the Daya River next to the battlefield turned into red.

But the scene was so horrific and those lead Ashoka the Great to stop the war forever. This is one of the most important reasons why Ashoka joined Buddhism in the first place and then he adopted a new policy called “conquest by Dharma”. Soon Ashoka launched a campaign to spread about Buddhism to far and wide and also to bring about moral, spiritual and social renewal within his empire. And this became one of his enduring legacies and became a model to provide the relationship between Buddhism and his state.

Contributions of Ashoka Related to Buddhism 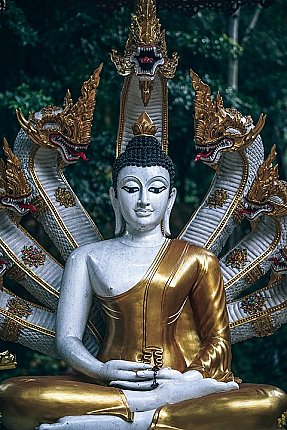 After becoming the follower of Lord Buddha, Emperor Ashoka began to spread the Buddhism all over his empire and far. During his lifetime, he had greatly contributed to influence the Buddhism. Some of them are as follows:

Ashoka Pillar is also known as Ashokstambha and these series of Ashok pillars are dispersed throughout the Northen Indian Continent. Some of the most popular Ashoka Pillar are Ashoka pillar in Lumbini, the first pillar of Ashoka in ruins of ancient Delhi.