Fetters – Chains That Binds To Cycle of Samsara

Fetters are the mental or intrapsychic phenomenon that binds all sentient beings to cycle of Samsara, life of suffering and pain.

Fetters in Buddhism are defined as the mental chain or bond that binds all sentient beings to the cycle of life of pain and suffering, Samsara. It is believed that fetters bind people and sentient beings from attaining Enlightenment and trap them in the cycle of Samsara . According to Buddha teachings, one can attain Enlightenment only by cutting through all the fetters that are mentioned by Lord Buddha. According to history of Buddhism, Lord Buddha, before leaving the royal palace, called Rahula a fetter since the existence of Rahula could bind him to his wife Yasodhara and Rahula too. In Pali Canon of Buddhism , the word “ fetters ” has been used to describe the mental phenomenon that binds sentient beings to sufferings in the life as well as after rebirth too.

In particular Sutta of Pali Canon, Lord Buddha himself states on the factor of fetters:

The fetters in Buddhism in Buddhism are categorized differently in accordance with Sutta Pitaka and Abhidharma Pitaka of Pali Canon.

According to Sutta Pitaka

Sutta Pitaka in Pali Canon enlisted 10 different fetters that bind to cycle of Samsara. They are: 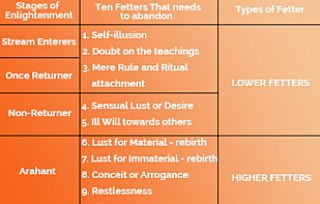 The first fetter in Sutta Pitaka is self-illusion which is also known as Sakkaya-ditthi. The view in unchanging soul or self, as well as the view of no self, is considered as wrong view in Buddhism.

• Doubt on the teachings

The third fetter is also known as sīlabbata-parāmāsa and the fetter refers the attachment of people to rule, rituals, norms as well as values. People believe and follow rules, rituals, norms and values thoroughly without truly understanding the meaning behind such practices and rituals. The first three must be abandoned so that one could become stream enterers and once-returners.

The fourth fetter is sensual desire and is also known as kamacchando . The sensual desire refers to the attachment and desire for the objects of six organs – sight, hearing, taste, smell, touch and mind.

• Ill Will towards others

The lust or desire to get reborn in the realm of desire or material existence is the sixth fetter in accordance to Sutta Pitaka . The sixth fetter is also known as ruparago.

The lust or desire to get reborn in the realm of immaterial or get reborn in a formless realm and is the seventh fetter. This fetter is also known as aruparago.

Conceit is the psychological state of mind that refers to the pride or arrogance that is formed from the rich or more knowledge. The Buddhist term for conceit is mana.

Restlessness also known as Auddhatya is identified as the mental factor that causes the mind to recollect something else due to more excitement.

According to Abhidharma Sutta

The Abhidharma Sutta provides ten other alternate fetters that could bind all sentient beings in the cycle of Samsara. These ten fetters are:

7. Lust or Desire for Existence