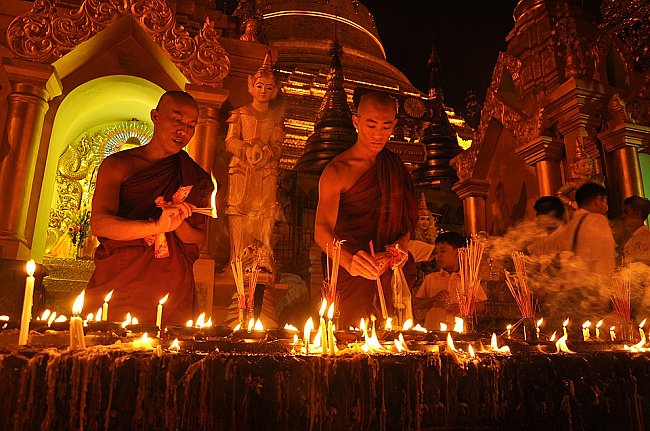 Rituals are known to be a form of a language which expresses a number of dimensions of the human condition ranging from their relationships with other people to their spiritual lives. Such rituals, being an important part of human lives, have had a significant presence in the practice of Buddhism, known as Buddhist rituals. Buddhist Rituals have been performed throughout the ages as a way of showing one’s devotion and veneration towards the Buddha, the enlightened one, in the form of different types of ceremonies, meditation, festivals and retreats. They are also known to have been performed alongside a number of Buddhist arts like Buddha Images and Buddha Statues for the practitioner to get properly motivated and inspired while performing different kinds of Buddhist rituals.

The Buddhist rituals have always helped the Buddhist community to share their common values and play a pivotal role in mutual support among each other. These rituals can help an individual to bring a heightened state of awareness to aspects of a number of things which need proper attention while also involving symbolism and speaking to the practitioner’s subconscious. The Buddhist rituals also play a big role in strengthening and highlighting the values, intentions and experiences one chooses to live by. This can particularly be useful when distractions and other concerns keep one’s mind away from what is actually important. Some of these rituals can be taken as journeys having a definitive beginning, middle and end. These journeys help the practitioner undergo a number of potential changes, mostly positive changes.

The practice of Buddhist rituals generally includes three major elements namely, recitation,chanting and making of offerings. Recitation involves reciting of the verses which are usually associated with the principal doctrines and ideals of Buddhism. These verses assist in expressing the spiritual aspiration making an individual a Buddhist. Similarly, the Buddhist ritual of Chanting is usually performed either in Pali or Sanskrit languages. It is a form of establishing an emotional connection with the Buddhist ideals. The Buddhists chant mantras repetitively as this can also be a form of meditation on its own. These chantings can also be termed as symbolic representations of Enlightenment in the form of sound. In the same way, the Buddhist ritual of offerings generally includes offering of flowers which symbolizes both beauty and impermanence, offering candles or oil lamps symbolising the incandescence of Enlightenment and also offerings of incense which infuses in the air similar to the way a life lived ethically touches the world.

The Buddhist rituals are most effective when an individual practices them wholeheartedly or with full devotion. To participate with any form of reluctance diminishes the effect a ritual has over the practitioner’s mind and soul. For one to be better engaged in a ritual, he or she should be fully aware of their most common structure and elements. This way they can more easily create new and impromptu rituals by bringing them in the structure alongside some of the many possible elements. One can say that the structure of the Buddhist ritual is its grammar and what fills the structure is the vocabulary. The bigger one’s ritual vocabulary, the more he or she can accomplish through these rituals.