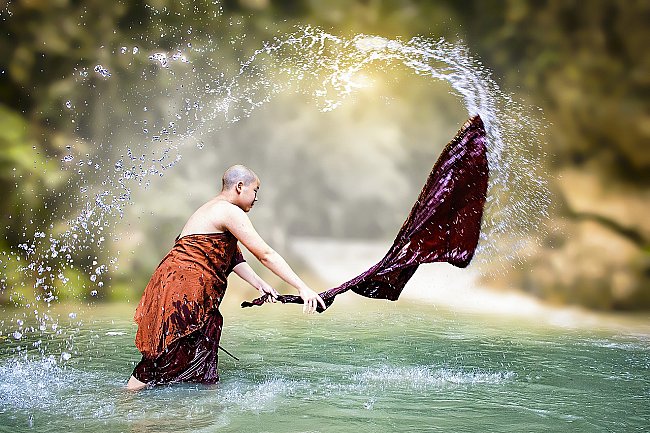 The tradition of wearing monastic robes is common for Buddhist monks and nuns and this tradition may date back to time of Lord Buddha himself, almost 2500 years ago.

The tradition of wearing monastic robes is common for Buddhist monks and nuns and this tradition may date back to time of Lord Buddha himself, almost 2500 years ago. The monastic robes are known as Kasaya and is usually named after saffron dye . During the time of Buddha, monks used to wear robes that were patched together from the rags. In Sanskrit and Pali, the monastic robe is also called “ civara ” which means the robe without any regard to colors.

There are various Buddhist art in India and China where Lord Buddha was shown wearing red robes . During the lifetime of Lord Buddha , as the disciples of Lord Buddha grew in the community of Sangha, so Lord Buddha made rules to make necessity of wearing robes. The record of such rules can be found in the Vinayap-Pitaka of the Pali Canon or Tripitaka. According to record, it was believed that Lord Buddha taught first monks and nuns to wear the robes of “pure cloth”. The term pure cloth literally means cloth that is not wanted by anyone. It is believed that original Buddhist Kasaya / cloth was originated in India and they were constructed from the discarded fabric or cloth.

According to Theravada Vinaya , Kasaya had three pieces of cloth and together they are called “Triple Robe” or “Tricivara”. The robe wore by Theravada monks today is believed to be unchanged from the original form of Kasaya from 25th Century. The three pieces of Kasaya are as follows:

Tibetan Buddhism follows the Mulasarvastivada Vinaya and wears a red robe as the characteristics of Mulasarvastivadadins. There are many kinds of robes, hats, and capes that are worn by Tibetan nuns, monks, and Lamas. The basic pieces of Tibetan robes are: